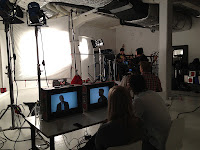 Around a month ago I was asked to take part in an 'expert panel' alongside three other academics, in different fields than mine. I immediately said yes because starting over in a new country means that you have to expose yourself where you can in order to make sure (the right) people know your name and in the longer run fund your research. Come to think about it, being in academia is not that different from from being an actress/singer, a career I am only too familiar with through my mother. It turned out to be a filmed panel done for commercial purposes and although I paused for a second, the next part made me stay on: I am being paid a good amount of money for my time. So although I got to talk about my research and my opinion on the different topics, I can't help having a feeling that I sold out. But nevertheless, last week I spent half a day in a film studio being interviewed and participating in a panel on topics relating to my own expertise. It was an interesting experience (but not a new one, I have been 'expert' on programs before) and I just hope that it will not be perceived as if I have sold my soul to the advertising devil and that few people will in fact watch this campaign.
Posted by Louise at 5:43 AM 12 comments:

Email ThisBlogThis!Share to TwitterShare to FacebookShare to Pinterest
Labels: Career

Zoe is so far just bilingual. I speak Danish to her and her dad speaks English to her; she seems to understand both equally well. She attends an English speaking daycare so she is only exposed to Swedish when she interacts with our occasional babysitter and the few Swedish friends we have here. Obviously we will have to make sure she learns Swedish at one point but so far this has worked out well. Since Mark speaks neither Danish, nor Swedish, English is also our home language so I reckon Zoe hears approximately 80 percent English and 20 percent Danish in her everyday life. She now has a speaking vocabulary of around 10-20 words depending on how you count.

One of the things I am most proud of is that her 6th word was "bog", Danish for book. She even says it more clear than any of her other words. Her previous ones were simply mama, dada, baba, aye and no. Not that these are easy to decipher, mama means both mom, mommy's milk and food. Baba means baby but also anything childlike such as dolls, strollers she sees on the street (okay, which probably have a baba in them) and herself. But more specifically, her first words were non-language specific (except for no, which is only English). Even the word for more, "mere" in Danish was some mix, sounding more like "mar". But as she is getting better and picking up more words, very likely in daycare, it is clear that her understanding of language is that we ourselves decide what to call something and that there is no problem in that. She knows that I call it "øre", "næse", "mund", but when I ask her to say it, she says ear, nose, mouth (well more like eaaa, nos and mau). She observes that we use words specific to us, and which she understands, so she simply selects the words she wants to use. It is the meaning that is important, not the actual word.

Like any toddler she says hilarious things, particularly if you ask her mother. My favorite is her utterly surprising exclamation "oh no!" whenever something goes slightly wrong. And things go wrong all the time in her world. She drops a piece of cucumber on the floor (oh no!), she finds a damaged tile on the staircase up to our apartment (oh no!) or she can't find her doll before bedtime ("Zoe, where is your doll?" Oh no!). In fact I have the suspicion that it also means "I don't know" in specific situations. Of all the peculiarities she says, this is the one I hope she keeps the longest because it has such cheer childish innocence to it.

Okay, and then finally, I'm not proud that her 7th word was "mør", smør, which is butter in Danish. She loves her bread with butter in the morning and when I look away she runs her finger through the butter and eats it straight up. If I ask her why there are holes in the butter she looks puzzled at me with her big blue eyes and throws out her arms: Oh no!

Because I don't want to end up like this family (who I feel utterly sorry for, the flight crew seemed in my opinion to have been the uncooperative ones. The sharp distinction between 23 months and 29 days and 24 months and 2 days means that you have to give a bit of leeway to the toddlers that are this age. If not the airline needs to make a rule that children between 2 and 3 cannot travel. It is that simple), I have several tricks that I use and occasionally forget to use when flying with Zoe. She is still a lap infant and due to airlines' wide interpretation of lap-riding rules I am prepared to be flexible. Generally, discount airlines tend to make guidelines into strict rules so for example even though there was an empty seat next to me on the flight back from Copenhagen, I was told that Zoe had to sit on my lap with the extension belt on take off and landing.  The ironic part of course being that if I had paid for that seat she would have had to sit in it. Regardless of her 22 months of age. Scandinavian Airlines always let me choose. 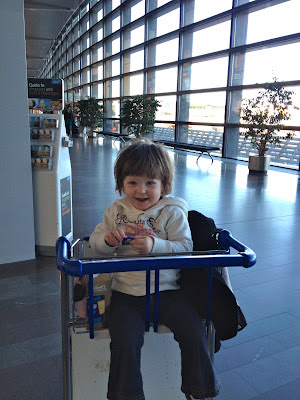 In an aim to be a bit structured, here are a few of my best tricks in absolutely no particular order:

Our next trip is Helsinki in a couple of weeks. I am flying over alone with Zoe and Mark will fly back with us. He is attending a work meeting and I always wanted to see Finland's capital. The flight is about an hour so no big deal.
Posted by Louise at 12:03 PM No comments: