I don't usually write much about my love life because it is very private to me, so I might mention that I'm seeing someone, but there is a big difference between dating someone and actually having feelings. Add to that, trying to date as a single mom while trying to get pregnant, oh and splitting my life between three cities, the last five years have been messy to say the least. However, rarely dull. I'm lucky to be in a very social work sphere with a lot of men around me, being a very social person with a lot of chances of meet new people through friends, but I also lived in the heart break city of them all: New York City. My main challenge, however, is sadly that I'm an extremely well educated and (people tell me) smart, attractive woman. It unfortunately creates as many barriers as advantages, if the educational part is even an advantage at all. A relationship only works if you can have an equal informed and nuanced conversation and respect each others' educated viewpoints. I have out-argued many a first dates or left social conversations because there was no challenge.

Another problem I have is that I tend to fall stupidly head-over-heals in love with guys. Not necessarily very often but when I do, it is ever encompassing and it takes me months or years to get over it. Because as sad as it sounds it has only ever happened three times where it was actually reciprocated. And all of those three times, the guy promised me everything, only to pull back weeks or a few months later, leaving me completely heart broken.

But there is one thing I have learned about relationships, from both heart break and dating without any serious feelings: A relationship needs to have certain qualities on top of two people being in love with one another. For me it boils down to mutual respect, some essential things in common and feeling comfortable in each others' company. Then I have a few very specifics that I'm not going to mention, but these are specifics that reflect trauma from my long-term marriage where certain things just never got solved. But if they are all there, I'm in. Maybe in another 10 years.
Posted by Louise at 6:24 PM No comments: 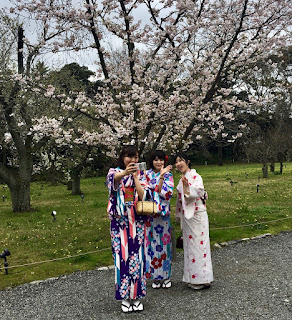 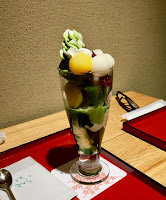 Over Easter I went on one of the first real holidays in years (real holiday defined by not being three days tagged on to a conference) with my new special person because this would be one of our last chances before I can't fly for a while. And when I can fly again it will be, if all goes well, with a baby in tow. It was the most wonderful trip, just relaxing and doing touristy stuff, because in Japan you are not fooling anyone, except of course if you are Japanese, into thinking you are anything but a tourist. We saw temples, cherry blossom and I ate an insane amount of green tea flavored items, from ice cream and kitkat chocolate to yogurt and pastries. On the flight there I had hoped to get upgraded because of my condition but no such luck, however, Japanese people are very  sensitive towards pregnant women and I was offered to skip lines, sit down on a crowded subway and one evening we got seated in the special section of the restaurant for only Japanese because it was more comfortable for me.That was one of my best evenings ever because we just sat there, laughing, talking, drinking sake and enjoying life. But as all holidays, it ended and I'm now back in Copenhagen working until Zoe and I go to my yearly main conference in the beginning of May.

Zoe and the cutting board

Back in November, Zoe and I were traveling to a conference in Florida, following a week in New York to hang out with friends and say a final goodbye to our lovely apartment that we had called home for almost two years. I had to pack up the very last things that I had left such as my mocca coffee maker, a few cups and my cutting board, an item I had bought as one of the first things when realizing that the kitchen didn't come with one. It is a high quality solid wood type cutting board from Williams-Sonoma because well, if I had to buy my own, it might as well be a good one. We therefore had to bring everything with us in the suitcase, going to Florida for the conference and Disney World for a day, before taking it back to Denmark, three flights in total. As we checked in in Newark, the check-in lady informed me that I was 3 pounds overweight and that I had to remove 3 pounds or pay $200. Remember that this is kind of ridiculous thing because I always travel with only one checked in suitcase for Zoe and I. We are allowed one each but try to imagine me with a 6 year old who can just about roll her own hand luggage, then having two suitcases and a hand luggage on my own. Makes no sense when everything pretty much fits in my not very big suitcase. I looked at her and informed her that I was pregnant and that I was not capable of carrying a lot when also handling my child, but she insisted. I pulled down my suitcase and realized that the cutting board would do it. I took it out and magically enough, we were now allowed to check in our luggage. The only place however where the cutting board fitted was in Zoe's little rolling suitcase, sticking up from the top. Zoe was completely unphazed and proceeded to roll her suitcase to security check with a large cutting board sticking out.

Everything was good, except now, every time she stopped and let go of the suitcase it would fall forward. At security we went through as the pros that we are, with Zoe taking her iPad in her hand, as well as the suitcase, to a bench slightly outside my vision while I packed up my own laptop and liquids at the end of the conveyer belt. When I got to Zoe I found her in tears with an elderly lady next to her, holding her iPad. What's wrong, what happened, I asked and felt like the worst mom, abandoning my child to figure out suitcase re-packing on her own. Zoe looked up at me. "I was trying to put the iPad back in the outer pocket but every time I try, the suitcase falls over and the cutting board hits me in the head". Sure enough, Zoe had a red patch in her forehead. The elderly lady who had seen Zoe in distress, had tried to help but not succeeded either. I went over and took the cutting board out of the suitcase so she could place the iPad back in it, before putting the cutting board back again. I comforted Zoe and promised I would help next time. But in my head, I couldn't help laughing just imagining her trying again and again to put the iPad back in while the cutting board made it fall over.

Zoe figured out how to handle the suitcase with a cutting board sticking out like only a flybaby would, because my "I'm pregnant" excuse worked as little for the next two flights and I had to take it out of our checked luggage due to overweight each time. Now that I use the cutting board on an everyday basis to cut bread, veggies and fruits, I think of my amazing flybaby who bravely strolled through several airports with it, probably to the amusement and wonder of our fellow passengers.

Posted by Louise at 5:46 PM No comments: