Scenes from the last 3 weeks

Copenhagen airport, end of June, 11am

"Excuse me, excuse me", I squeezed through the slightly annoyed passengers at gate B2 waiting to board the plane to Stockholm, probably wondering why I thought I had the right to get on first. But I was not getting on. Instead I was waiting for the littlest passenger disembarking from the slightly late arriving plane from Stockholm. I was craning my neck to see the people exiting into the glass tube from the air-bridge, well-knowing that she was not allowed to go out on her own and had to wait until the end. My heart was pounding and when I finally saw her in the distance behind several layers of glass it skipped a beat and I gasped loud enough for the gate agent to pay attention to me for a second, yet still ignoring the fact that I was clearly overstepping the border between gate and air-bridge. When Zoe turned the corner and saw me, she started running as fast as she could pulling her little suitcase. "Mommy!', "Zoe!"; we hugged and kissed and I held her close, careful not to squeeze her too hard. When we finally let go, I looked up at a very young confused airline employee who had accompanied her out of the plane. "Are you continuing on a different plane?", he asked and I told him no, I had just arrived from New York which is why I was still inside the terminal. I wanted to explain that we hadn't seen each other for two months but then I realized that I didn't care what other people thought at all. All I cared about was that Zoe was here with me and we were going on holiday for three weeks. As we walked towards baggage claim, Zoe kept looking up at me and clench my hand, "it's so good to be with you again, Mommy".

My dad raised his glass filled with single malt that he had bought specifically for celebrating my new job in Denmark (he knows I love whiskey, particularly the peaty single malt kind): "To your new job in Denmark. We are very excited to have you back. And to you getting back to the US again". I knew exactly what he meant.

On the plane back to New York, mid July 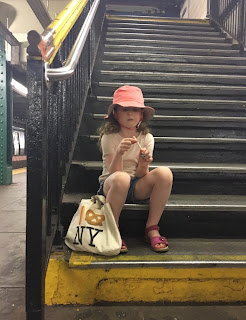 New York the day after we got back to our apartment

Zoe was sitting on the side of the bathtub in our tiny NY bathroom while I put on makeup by the mirror. "But mommy", she said thoughtfully, "I don't really have any friends in Denmark. I have friends in New York and in Stockholm, but not really anyone in Denmark". I agreed with her and made a mental note to work on that.

"Mommy, is it morning yet?" Zoe sat up in our dark bedroom. "No, but we have jetlag. Do you want to go for breakfast?" Zoe agreed excitedly by the thought of pancakes and bacon and we headed out into the still cool West Village morning and found a dinner close to her school that was open at 6am. As we sat there with the crass but friendly waitress serving us orange juice, bagels and bacon I couldn't think of anywhere better to be. This was our third summer in New York City so we were prepared for the sweltering heat and we knew where the free outdoor pools were. This was also the start of some kind of end though. Zoe would be in day camp for a couple of weeks, the same ones as last year, and then I would have to take her back to Stockholm before returning on my own to finish my work in New York. She would start in yet a new school where she knew nobody (three kids from her old daycare were also starting there, however all in the other class) and in September I would start my commuting life between Copenhagen and Stockholm. I already had plans for us to come back to New York in November and December, courtesy of a conference and a committee meeting. But right now we were here, waking up to the view of the Empire State Building every single morning.
Posted by Louise at 8:14 AM No comments: