Zoe expressed her joy regularly ever since I explained that we would spend Christmas and New Year in Copenhagen. She had been asking continuously since December 1st when it was winter and when it was Christmas, only to diss my affirmative answer because it obviously could be neither since there was no snow yet. She has never experienced a Christmas with snow in her life, yet the heavy snow falls during her two winters in Stockholm have left such impression that winter is snowy and Christmas is during winter. Slippery concepts and hard to explain. Especially since it is almost never white Christmas in Denmark and rarely in Stockholm.

Taking the train to Copenhagen on the 21st, I prepared her that it would be cold but no snow, but it would be Christmas. We arrived just in time for a pre-Christmas eve with some of my parents' friends and three children around Zoe's age. The oldest boy started singing a Danish Christmas song which didn't impress Zoe much but when I suggested 'Rudolph the red-nosed reindeer', she chimed in quickly and sang loud and clear the whole song, to each of the adults' bedazzlement. Because she sang it in clear and perfect English. The boy stared at Zoe in disbelief and said "but I know it in Danish" and after him singing a few words, all the adults joined and helped finish it. When I looked down at Zoe she was tearful and quiet. She didn't know it in Danish like everyone else. I tried cheering her up and said she was great at so many other songs. But the look in her eyes, the sense of her being an outsider was etched into her expression and I had to work hard the rest of the evening to make her feel better. For the next few days I kept singing all the Danish Christmas carols I knew, over and over again, so she could hear them. On Christmas day she was able to join on a few choruses. 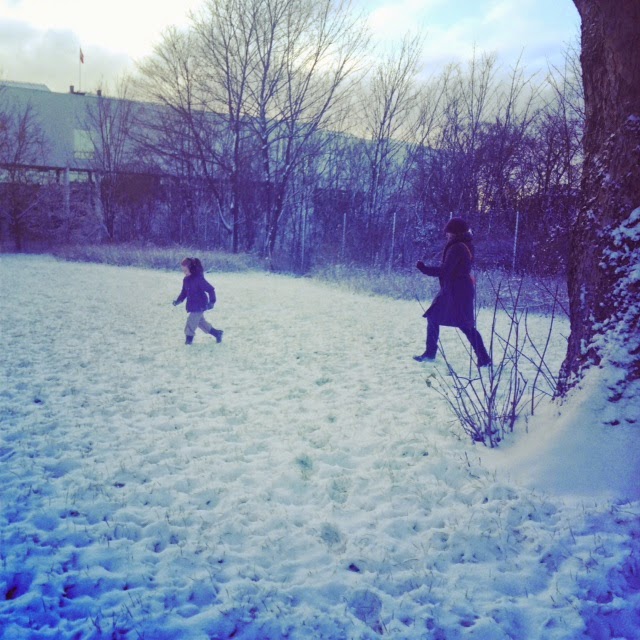 Being bilingual is one thing, being bi-cultural is even more difficult, especially when not exposed to one of the cultures on an everyday basis. I try to teach her everything about Denmark that I can, read books, tell stories and feed her Danish food. But she will always miss out on things which will then be tough on her to see others master fluently. She considers herself Danish (although she mostly gets confused when people ask her where she is from because what does that mean to a triple citizen anyway?) and loves to speak Danish. But by not living here she is missing out on many things too.

Well, at least her wish came true, which was a complete surprise to me: On Christmas day we woke up to quite a big snowfall and we went out to the park and played and had a snowball fight. She enjoyed every minute of it but I had to prepare her the snow would be gone next morning. "It's okay mom, I don't have my sleigh here anyway".
Posted by Louise at 6:11 PM No comments:

Lately I have been surprised by people who are not able to be tactical. I certainly am, from thinking through the best way of doing my taxes during my 6 months in New York, getting the best set of miles on my account to stay on gold status, to telling certain people something at work and others something else. I obviously can't be specific on the latter one but work is where  most of my speculative maneuvers take place. Yet, people around me fail to do any kind of strategic actions. A coworker went all emotional and annoyed at the very people he needed to keep happy, in order to keep his job. Another coworker did not tell me about an incident because he didn't think I could help even though he knows I'm able to change these things. And friends I am around don't think about what might happen when I'm not included in certain events. I even wonder why some people don't just hook up, get together when it seems like the most obvious thing to do for all surrounding partners. But I guess that's tactics to the extreme. And that's probably the difference between me and others. I'll do tactics to the extreme, be with someone because it makes sense. Stay with someone because it makes sense. And then occasionally I'll fall crazy in love with the completely wrong person because they have that special thing going on and I am ready to give up everything for that person. I lose out and realize I need to be tactical again. What does love have to do with it anyway?

Speaking of not being tactical, Zoe's dad "forgot" to tell me he had filed for divorce. So one evening, coming home to a sleeping babysitter after a work dinner, I was met with a thick envelope from the officials. Our other colleagues had signed and testified that we hadn't lived together for 2 years so no matter if I signed or not, we will be legally divorced after 2 weeks of me receiving the letter. I was too chocked to cry and just sat staring into thin air on my couch; I finally slept after 2am and a sleeping pill. To his defense (although there is really nothing much to defend there when it all comes down to it) he apologized profoundly over text; he had filed a month before and tried to work up the courage to tell me until now (I calculated and realized he filed at a time when he was very angry with me because I had turned down his suggestion to share Zoe with 2 months each while in New York. Only non-moms, and people not knowing how close Zoe and I am, can ever even suggest such crazy idea, who could imagine me not seeing her for 2 months? My head hurt just by the thought of not seeing her for a week, let alone three weeks in January which is the schedule now). In any case, it was hard for him to do, he said. I certainly hope.

Posted by Louise at 4:14 PM No comments: