To my big surprise my picture of Zoe having breakfast in the kitchen windowsill got 46 likes within 24 hours. I had sneaked in and snapped her as she ate a chocolate cookie and strawberries (a perfectly reasonable breakfast for a Saturday) and watched her favorite show on the iPad. She had crawled up there herself, with her owl duvet, because she wanted my company; I was still fixing my coffee and bagel. But where it might be the epitome of a wonderful start to a day, our own secret was that the day just kept getting better.

Three hours later we met with a friend and her baby at Ellary's Greens for pancakes and freshly squeezed cucumber/carrot/beet juice. Zoe fell down from the bench and scraped her foot, crying her eyes out (it was a nasty cut right on top of her big toe) but proceeded to snuggle up and fall asleep on my lap. After a great girl talk with my friend who has a 9 month old baby, Zoe woke up and we went looking for a playground, leaving said friend and baby to their nap time. The sun was out and Zoe was sporting both a flower sunhat and sunglasses. We were quickly successful since I remembered the Bleeker playground from a year and a half ago when we had passed by and spent an hour there. Zoe knocked herself out taking the big-girl slide and riding the tricycles that were all too small for her now until we took a break at a toystore across the road. I promised her one thing under 30 dollars. She chose a giant bubble kit and back at the playground she was the center of all the kids' attention with the big elongated bubbles she was able to make. It was finally getting cold in the shade and I knew the only way I could lure her away: "Zoe what would you like for dinner?", I quizzed her, which is usually cue for "do you want sushi?". She replied as predicted and I found a place a block away that seemed low-key enough for us. She proceeded to sit at the bar and order herself. One of these, four of those. Oh and miso soup, thank you. She charmed the chefs across the counter and they kept giving her little treats: A cucumber flower with bits of salmon inside, little sea wheat pieces etc. I was prouder than proud of her being well-behaved and curious. After dinner we walked back home, her playing a fairy game the whole way: She would put on her pretend clothes, her wings and boots and then run ahead as fast as she could with flailing hands, only stoping if she reached a cross street. 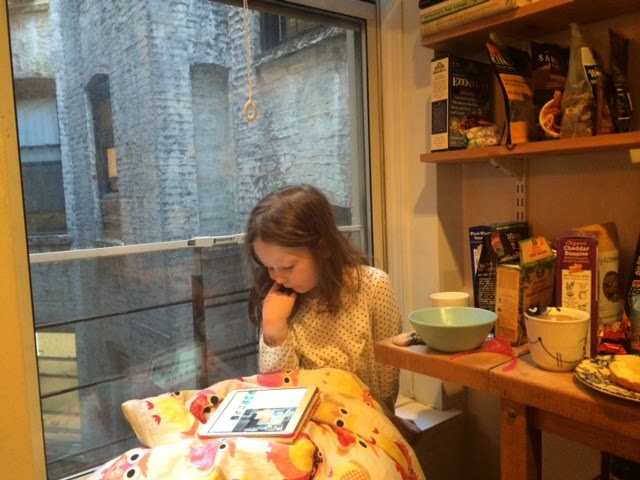 By this time, the Saturday evening party people were already hitting the West Village streets and it was interesting to see the mix. Hipper than hip young people walking around making sure they looked and said the right things, almost run over by a four year old girl in a red dress and gold shoes, ignoring their attention seeking completely.

When we got home, I didn't have the heart (or energy) to put her to sleep and we ended up watching Octonauts together in the sofa with a cup of tea and a snack. Ten PM we both tumbled to bed under the same duvet because it is now very cold in our apartment due to the warmer weather fooling the janitor into turning off the heat. "Mommy", Zoe said. "This was the best day ever". I agreed, not knowing that the next day would be just as good if not better.
Posted by Louise at 9:29 PM No comments:

The slow saxophone jazz on the 2. Avenue uptown platform made me slow down my pace and reflect on how much I love the New York subway. Its busyness, its roughness and its friendliness without chit-chat. I have yet to get on a crowded train with Zoe without someone giving up their seat for her or moving over so I can sit next to her. The calming music also finally allowed me to laugh about my bad-mommy moment of the morning: Me reaching over Zoe to turn off my 5:30 alarm but forgetting that I had plugged in my phone last night and clumsily dropping it, straight in Zoe's face. She cried in her sleep while I whispered, "I'm so sorry, I'm so sorry". Her eyebrow was read from the blow and I hoped it wouldn't bruise. She slept for another hour and a half while I got up and showered.


I squeezed into the overfilled subway car together with all the other blonde career women with their lattes in one hand and their Tory Burch bags in another, only distinguished from their upper west alter egos by their edgy hats and flats rather than heels. One of them let me reach my arm over to hold onto the rail and we exchanged one of those smiles acknowledging that we were all in the same boat, going to the same kind of office job, staying late to try to make it in our competitive world before it was too late. Except I couldn't stay late, I had a four year old to pick up and then feed and put to sleep. I would then be so tired that I would fall asleep next to her, tumble out to brush my teeth around 11pm and go back to bed, only to set my alarm for 5:30 so I could get an hour's work done in the morning instead. But at least I was still in the career game, only difference these days was that I made my coffee at home and drank it at 6 am before Zoe woke up. And right now, I wouldn't want it any other way.
Posted by Louise at 11:32 AM No comments: