Today was my first real day as New York full-time working mom. Until now, my parents (who brought her over), have been here helping me out with Zoe and as much as it can be a bit tedious staying four people in a small New York apartment, it has in fact been blissfully easy. Mostly because it has enabled me to go out for the occasional drink late at night when Zoe is asleep, and transitioning into the daycare was taken care of while I could go to work full days. My mom has had several cozy days with her, just playing at home, eating cracker bunnies for breakfast, lunch and dinner, which they both thoroughly enjoyed.

But life must go on and after picking up Zoe at my friend's house (a friend who helped me out in a pinch between me having to stay at work, Zoe not allowed to be at daycare the full day yet and my parents having to catch a flight), my parents took off. It is just me and Zoe now, which is nice but also introduces the reality of being the real New York Full-Time Working Mom.

So between 10:20 and 10:35am today, between answering administrative email and writing on a funding proposal, I managed to grocery shop with delivery in the evening. At 3pm, after a very interesting talk at work about data science, math and journalism, I rushed over to pick up a still sleeping Zoe who had been scarred for life by the noisy Chinese New Year festival show in preschool, and consequently been invited for a playdate by Lisa's parents, since Lisa had apparently comforted and bonded with her. Obviously Zoe's own mom had to work on all day today when parents were invited for 11am (at least in Sweden the Lucia train is at 7:30am to catch the darkness and for parents to catch work hours). But I guess it is not a bad sign that your child is invited for a play date within the first week of her preschool attendance. Then Zoe and I had to hurry over to ballet class, a class Zoe has looked forward to since the end of the previous class two weeks ago. We waited for the subway that would take us to another line but it just didn't come. I cursed the Z and J line a bit and dragged Zoe up to catch a taxi. In the taxi I realized I had the wrong address but when we got off it took me another five minutes to realize that the first address was correct. When we reached the studio it was already ten minutes into class and while Zoe and I threw off her clothes and hurriedly put on her tutu and slippers, I told her to apologize to the teacher and tell her that her mom was terrible in fining her way around Manhattan. Or writing the correct address in her calendar. Next time I'll pick her up at 2:30 and we will have to wait for the subway so the 50$ classes don't turn into 60$ classes each time. 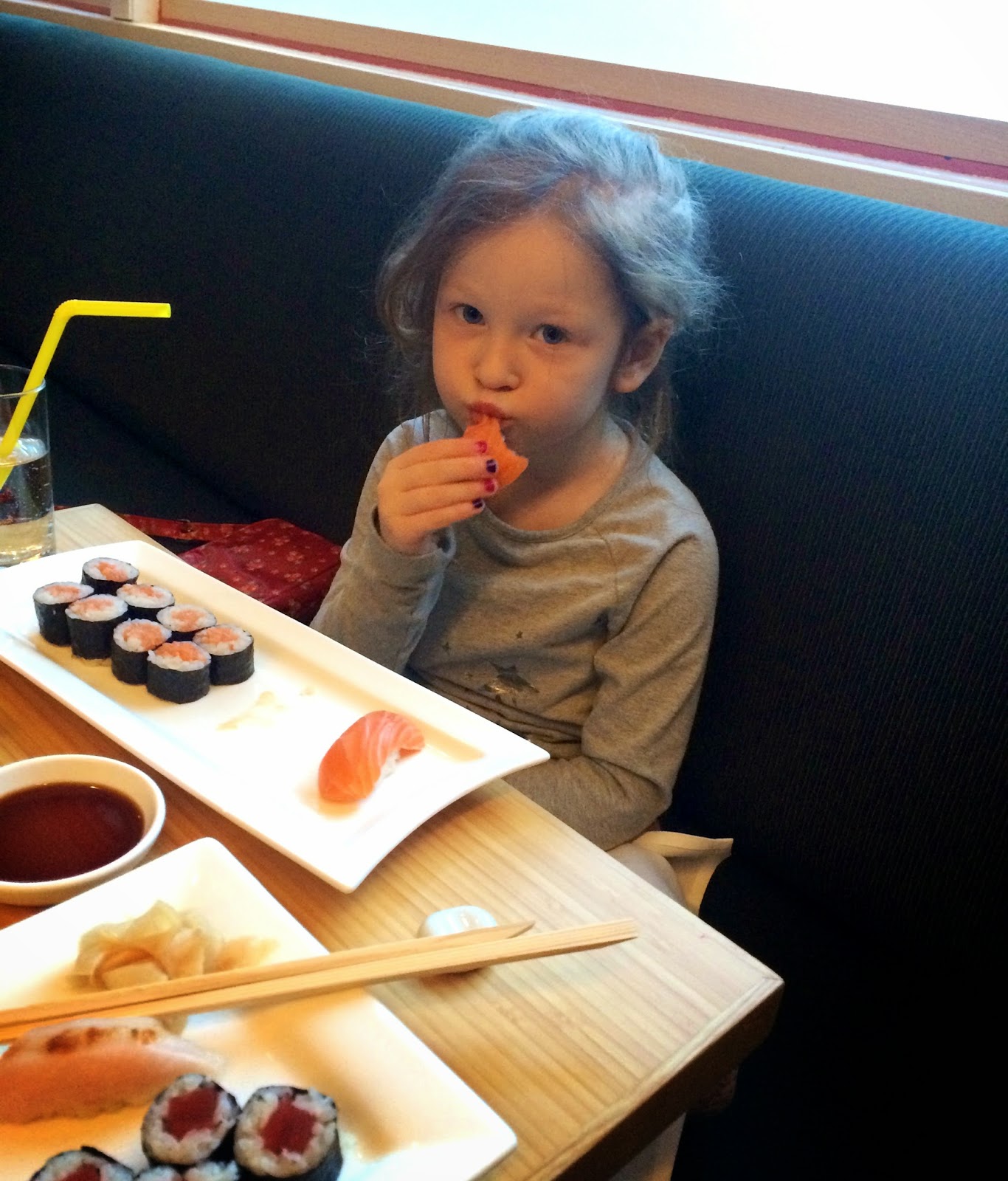 After the dance class I naively asked Zoe what she wanted for dinner. Sushi was the obvious answer and I agreed. Let's find a little place where we can take some sushi home. But Zoe wasn't buying it. "I'm hungry now, I want to sit down". I quickly looked up sushi places around us, partly embarrassing myself because we were virtually on top of three. We walked into one after I had checked that the menu was decently priced but they were not open yet. We crossed to street to yet another place and since that was open we went in and quickly got a seat in the small restaurant. It was very nice and the sushi was as overly priced as a restaurant in Tribeca would be. So there we were, mother and daughter having upscale sushi for dinner on a normal Friday afternoon. It was amazing, both the food and the company. Zoe is old enough that we can have great conversations and she is always fun to chat with. She was telling me about all the new things at preschool. She downed twice the amount of salmon rolls and miso soups as I did. As the waitress took away her empty plate at the end she exclaimed in her cute British accent: "Thank you for the food!" Not one guest in the restaurant did not smile or chuckle. And I thought: "I have the most adorable daughter".

We ran home, catching the red 1 that stops close to our house, just in time for the delivery of the groceries. As I put away the veggies and fruit, Zoe "read" the song that we had written on a piece of paper in the morning. Later before bedtime we played teacher and pupils, she being the teacher and teaching me about boats. "That's a good one", she kept saying in a teacherly voice when I tried to answer her complicated questions of how boats sail and what they are made of. It was clear what they had taught her in preschool these past few days.

My first day as a New York Mom ended up with me having a cup of tea on the couch trying to plan how I'll be able to read at least one article tomorrow while being alone with her. And still live up to the level of activities and quality. Or perhaps it is just a television day tomorrow. I can't be the perfect New York mom every day.

Every morning when I wake up I roll up the curtains in my bedroom and say good morning to the Empire State Building. It mostly looks dark when I wake up, contrasting the color party it has at night. One night it is blue and red, the next night, green and yellow. Some nights the peripheral lights are neutral and white. When Zoe gets here I'm going to take her up there so we can see if we can also see our bedroom from the top. 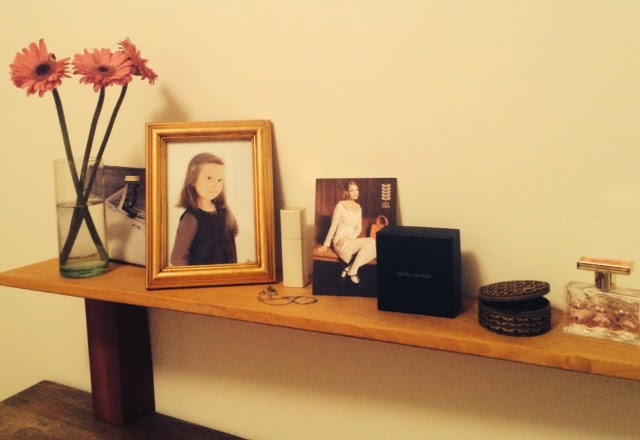 I also say good morning to Zoe's picture which sits on my desk shelf here at home; I have another picture of her in my office. She looks at me like she is a bit skeptical of what I'm doing, as if she is not sure if I'm being all that clever about things. I might not be clever about all things but one thing I'm sure I'm doing right, is being here in New York. I love it. I love the ease of communication with people, the contact I have regularly with strangers and the randomness of familiar strangers. The other night I befriended an upcoming broadway star in a restaurant who happened to know the waitress, who happened to be the lead singer in a show Zoe and I watched this summer. She offered to babysit Zoe when she gets here, which I graciously accepted. I love the university and my office. We sit in open office space which means I have to just turn around to share an idea or a problem that I might have. The group is tight-knit with two grad students and two post-docs, all of whom I like and already think highly of. My professor colleague has a stream of industry connections and academic colleagues coming in to visit constantly, which not only mean free lunch but also makes me practice those elevator pitch skills that I had forgotten in Sweden where nobody really cares what you do. Here, I have to fit my research into their frame of mind each time, highlighting either the sociological or the technical aspects of my work. We go to lunch together and chit-chat. Nobody comments on me being a woman in a man's world (even though I still am). Nobody jokes about spousal abuse (which my head of department proceeded to do in a workshop in Stockholm). Nobody walk too close to you with the aim of sliding their hand across your waist (yep, we have two rife cases of sexual harassment at my university in Stockholm). People are serious here, they work long hours. I do too. And I love it.

Yet, last night my stomach went into a knot again from missing Zoe. It physically hurts and I'm wondering if she feels the same. Last week I was back for six days to see her and it was wonderful just being around her. We stayed in a hotel close to her daycare and we watched DVDs without end, together in the bed and ate croissants in the cafe for breakfast in the morning. I sat there with my coffee staring at my amazing, adorable, clever little girl and decided that this was the best moment of my whole life. Her and I, just sitting together talking, eating, being together. My body was at ease and my mind was shooting little happy neurons around in my brain. I don't remember what we talked about but it doesn't matter. We were together. In the end she crawled up on my lap (which she did constantly that week) and held me. "Mor", she said, "I like you SO much". This is her way of saying she loves me.

Flying back to New York was a mess. I missed my connection in Munich and it took me waving my gold card while crying to get rerouted on another airline through London. But I made it back in time for my class the next day. My stomach still hurts from missing Zoe but in exactly six days and eight hours I get to see her again. And then there will be no end to the happiness.
Posted by Louise at 8:15 AM No comments: