Bowie was born two months ago today. And since I can't do anything normally, since my life has resembled an unrealistic soap opera for the last five years, he was of course born in a car. Not in the hospital, not at home. On the backseat of a car. The birth went so fast and my doula didn't realize, so we didn't make it further than the parking lot of the hospital. I grabbed him and pulled him onto my chest crying, assuring me that everything was okay. He was slightly small but perfect. He is still small and perfect.

Zoe adores him and has shown herself to be a great big sister, carrying him around, even changing him on her own initiative. Our summer together was amazing but now everyday life is knocking on the door. Zoe has started school in Stockholm because her and I have failed to convince her dad that it would be better for her to be in Copenhagen for school. Instead, he has generously granted me every second weekend and Zoe is just starting to realize this. In addition to calling me up crying at night ("mommy, why do I have to be here so much?") she counts the days until we get to see each other again. My stomach is in a knot and I'm trying to think up other possibilities that would enable me to see her more while she can still attend school in Stockholm as mandated by her dad and the State (last year school for her was not State mandated and I could take her to Copenhagen on weekdays). Meanwhile I have 4 more month of maternity leave, looking after Bowie full time but also being alone 24/7. My family is here and generously look after him 2-3 hours at a time if I need to and that means I have been able to go to the hair dresser and occasionally get a shower. When Zoe is here we go to the movies or swimming, while my mom looks after Bowie. Luckily he is a great sleeper who rarely cries and when he does, I pick him up and he stops. He loves being in a wrap and sleeps both in his crib and my arms.

But as with all maternity leaves, this is lonely. I spend so much time, just him and me and it makes me so sad to think that, somewhere else, my daughter misses me and has to spend all afternoon in the after-school she hates, instead of being with me. As my friend said "what a waste of maternity leave".
Posted by Louise at 4:49 PM 2 comments:

"We have to make the most of this time", Zoe said to me as I tucked her into bed. "This is the last time you and I are just the two of us". Her insightfulness touched me and I agreed. We were going swimming the next morning and then we had to pick up some items in the city center, in an effort to be just a bit more ready for the big day when her little brother will be here. As much as I wanted to nest and make sure I had baby clothes, a changing table and, well a basic livable home, I also wanted to spend every single second with Zoe, chatting, laughing, singing, reading and doing the things that mothers and daughters do together. It was indeed the very last time in our lives when it was just us. I grew teary eyed and hugged her. How would I be able to provide her with the detailed attention and care that I have done the last 7 years? How could a little sibling make up for the time that we will lose out on the two of us? Was it going to be worth it?

Within the last month, things have changed rapidly and my life is already completely different. I took over my new apartment in Copenhagen after selling the one in Stockholm and I have not flown since our trip to New York. I need to be in Copenhagen where the baby will be born and I need to have a home I can take him to when he is on the outside. I need to have a home for Zoe and as much as we loved our little apartment in Stockholm, its 34 m2 was not fit for more than her and I, with a bit of good effort. My apartment in Copenhagen is more than twice that size with a giant living room, ready to be divided into a bedroom for Zoe and an average living room. It is on the ground floor, which I initially was hesitant about, but Zoe is already running out to the back yard on her own to play with new friends and bike around on her new bike that I got secondhand for her. She feels secure that she can always knock on our kitchen window and get my attention if she needs to.

After she fell asleep, I made a few more plans that included a ceramics workshop and a trip to the local ice cream shop while we are still just us. Our new Copenhagen life awaits, soon with an extra little person.
Posted by Louise at 12:58 PM No comments: 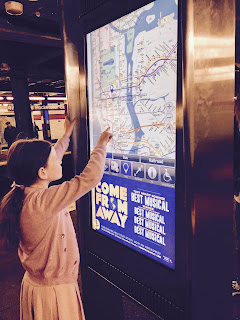 After bringing Zoe to my usual conference we are stopping by New York on the way back. I am officially on vacation without any deadlines, which is a rare thing for me, so we have been hanging out with friends, shopped and eaten our usually places and simply been a bit nostalgic about our old lifestyle and 'hood (West Village). I'm overwhelmed with the amount of play dates Zoe has had, with the fact that her old drama teacher volunteered to have her for an afternoon (essentially giving her a private theater lesson) and with all the people recognizing us at our regular places. New York is still home to us. But what really got to me was when we entered the apartment building this evening after a long fun day, and Zoe seemed a bit sad. "What's wrong", I asked and she looked at me tearfully. "It's just New York. I miss it so much". She then broke down crying and started hugging me. "I just miss it so much when we are here. And I grow up so fast, suddenly I'm a teenager, then I'm grown up..." I didn't know what to say but we walked up to 4th floor, her still sobbing a bit, me worried that she was reading my own sadness, missing New York at the same time as us having a brilliant time here. "One day you will move back", I half-promised.

But we also have a lot of good things to go back to Denmark to. We have our new apartment to go back to, a new little brother who will come out in a month's time, and friends and family to spend time with. I asked Zoe if we should stop going to NY for a while, so she wouldn't get sad and she actually nodded. We will see how we do though, once an addiction, always an addiction. The Empire State Building was shining blue for us that evening.
Posted by Louise at 10:08 PM No comments:

I grew up in a nuclear family with a regular life of going to school every day and having dinner together with my family every night. Like most middle class children in the western (and possibly also eastern, northern and southern) hemisphere. Yet, since I was 18 my life has been less than regular, mostly because I have spend few long stretches of time in the same countries or city, instead often in differing settings with a multitude of living circumstances and a mix of irregular jobs. It has never bothered me, in fact I enjoy the diversity in my life and I know I get tired quickly from staying in the same place. (perhaps this is one reason I feel so much at home in NYC, the city where you could eat in a different restaurant every night and never run out of new options)

But tonight, as Zoe was drifting off to sleep, and suddenly remembering that we forgot to read in the big history book when we were in Copenhagen, but it was too late now, because we were back in Stockholm, I had a solemn realization: Zoe has never had a regular life. At least not since her dad and I split up, which she barely remembers anything from. The most regular life she has had, was when we were in New York and, mainly because she was stably there for two months at the time, before she would go back to Sweden and spend two months there. In NY we would have bagels and coffee (only me) for breakfast every morning and run to school (because we were always late), before I would go to work. We would have dinner together every night and she would go to bed at the same time, after always reading a goodnight story. We had specific activities for each day of the week, from yoga (Zoe had a children's yoga class concurrently with me having a grownup class) to me picking her up and bringing her back to my work. On Fridays she had dance class and I would run to Wholefoods for food, being back in time for pickup and on weekends we would often catch a show.

These days, her dad and I, are doing two days each, then five days each, in order to distribute the weekends. But with me in Copenhagen, we go back and forth, with Zoe missing a day in school here and there (kindergarten in Sweden is not obligatory).  She loves it in Copenhagen and I make sure to always give her a detailed schedule of what we are doing so she feels in control and knows where she will be. But a regular everyday life, it is not. As I was rubbing her back and she was still awake, I promised her that when I get more organized, I'll make sure to read a chapter of a book every night, without exception and we won't have ad-hoc sushi while watching old Chaplin movies at the coffee table. "What does ornagized mean, mom?", she said and before I could answer she went on "but I like it this way, I think it would be boring. And you are the best mom in the world". And who am I to argue with that?
Posted by Louise at 4:28 PM No comments: