Zoe and I were released from our Sweden lock-down and able to go to Denmark to see our family, leaving on the train this morning. Although we normally like taking the train it was a little drawn out this time, probably because it was during the peek wake ours of the day and despite brave attempts, Zoe couldn't fall asleep for the nap that she usually likes taking. We went to the cafe for coffee (mine = coffee with milk, Zoe's = milk with coffee) and distraction for a bit, but for the last three hours Zoe kept asking if we were on the bridge yet. I noticed her Danish R pronunciation improving slightly each time. 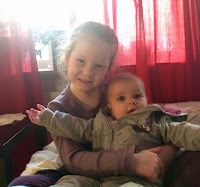 We had four fun days back in Stockholm, staying with my friend who has a new baby and Zoe showed her most caring side, holding the baby, entertaining the baby and eagerly playing with her. It was very nostalgic watching Zoe sit in her old crib with a new baby who was now going to grow in it and bite the white paint off the railing, just like Zoe did three years ago. We then went on play dates, dinner dates and bought some clothes, both for Zoe and me.

Now a busy week in Copenhagen awaits until we both fly out next Wednesday, Zoe back to Stockholm and me back to New York.
Posted by Louise at 5:32 PM No comments:

This evening I fly to Stockholm to see Zoe. I had hoped to be able to take her back to New York for two months but it looks like her dad won't allow her to come back here.

It has been a crazy week of deadline crunching. I have three affiliations at the moment and hence, three research groups to write papers with. This was the first year in Zoe's life where I didn't have her during the deadline. Not sure why I always ended up like that previously (her dad is in the same field and have the same deadlines as me), but I guess I was generous. I remember having to submit early, then pick Zoe up and feed us dinner, then continue editing after she was in bed. I worked until the 2 am deadline, often half an hour extra, got up with Zoe the next morning to put her in daycare, just to go back to my apartment and crash, catching up on lost sleep. This year, I'm catching a plane back to Stockholm immediately after the deadline tonight. I'm excited to see Zoe and don't care if any of my papers get accepted, if I can just be with Zoe. And take her to New York for a couple of months. Cross your fingers.

That evening the top of the Empire State tower was hidden behind grey clouds; only the top level was visible behind the fog. It almost seemed appropriate for the end of my day, which had included a journal paper rejection and a research meeting where two people yelled at each other. I have started a new position to complement my (unpaid) visiting professor status and this one is a good 50 min commute away (which is not bad considering New York commutes). I'm actually excited to work with these particular people including one female researcher whom I already get along with very well. The two of us were not among the yelling researchers but I do think I'll have to help sort out some of the issues. But all this was nothing compared to the phone call I received in the middle of the day.

I was standing by the salad bar at the university food court, ordering my tuna and cranberry salad with my new colleague/friend when I heard my phone ring. It was just the two of us but she clearly recognized from my expression that I needed to answer it. I clicked the green button and saw Zoe's wailing face. "Mommy, mommy", she cried. "Sweetie pie, are you okay?" I said, trying to hold back my own tears. I went to a corner of the shop, motioning to my friend if she could please take care of my salad and payment. Zoe just kept crying and saying "mommy, mommy". I asked her what was happening but she was clearly too upset to say much. I told her to take the phone into her room and sit in bed where we most often talk because our chats fit with her bedtime. She sat there still sobbing but now her words were more clear. She explained that she had wanted to call me but her dad said she couldn't. She said she wanted to call now but he had refused. It was not clear if she had taken the phone herself and called (she knows the iPhone pretty well) or he had given in. "Zoe sweetie", I kept saying, "I'm so happy you called, you can call me any time, always". I recalled our last conversation where I had told her she could always ask or use her own phone (she has an iPod Touch where she can skype from) and she had probably remembered. By now my colleague and I had started walking and I tried to calm Zoe down by talking about other things on my side of the Atlantic. "Say hi to my friend", and "Look there is a statue, doesn't it look silly" which seemed to calm her down. When we got into the building where our meeting was waiting for us the connection got choppier. I told Zoe I loved her and we hung up.

I was shaken up the rest of the day. I looked for plane tickets to go back to see her tomorrow. I tried figuring out how that would be possible with an expired visa. I would not. I couldn't stay long enough to get a new one stamped into my passport. I called my mom and she calmed me down. The Empire State tower was still visible when I came home but slowly disappeared behind rain clouds during the evening.
Posted by Louise at 4:35 PM No comments:

I cry over a lot of other things at the moment. I tear up hearing about the refugees from Syria and the people helping them. I get sad over people in the posts from Humans of New York and I cry when I see another little child Zoe's age on the street. I cry over all the little things that are sad, sentimental, except the one thing I really want to cry about.

I called the daycare today to talk to Zoe. I hadn't received any reply to my request to talk to Zoe this weekend, just as last weekend, and it was my only chance to talk to her. She was puzzled and hurried. "Mommy, why are you calling me at daycare again?" I told her the truth and said she could perhaps tell her dad when she wanted to say goodnight to me and call me. He might listen to her, now that he was ignoring me. She told me about how she loved a particular type of toast in the morning and how she was happy about her swimming gear for her doll that I had sent, but sad that her doll couldn't go in the water. She said she missed me and wanted to come back to New York with me. She then said she probably had to go and we said our goodbyes. It was so nice to hear her voice and I was happy that she seemed cheerful.

I'm going back to see her later this month but not sure when she will be able to come back. I'm puzzled why it came to this, why her dad is suddenly deciding over her life when we share custody but after the threats and demands, there is nothing else I can do short of just taking her. Which I would obviously never do. So instead, I try to cry over other things than the one that matters the most in my life.
Posted by Louise at 11:09 PM No comments: