I woke up the morning of my flight to Copenhagen to one of the biggest weather surprises since moving to Stockholm: Snow. Snow covering everything. It is mid-April. Since it was a Saturday morning, very early (I had to leave the house by 7am) nothing had been cleared yet and walking with a toddler and a carry-on suitcase was a challenge to say the least. So much of a challenge that I had to give up on catching the train that would have provided be with a cheap, but slow journey to the airport and instead head for the Arlanda Express, a 260 Skr ($38) train ride to the airport. Zoe had no patience with the snow and kept wanting to be carried ("up, up") and I almost lost my cool before we even got to the station, a merely 5 minute walk away. When I finally got to the airport, with half an hour to spare, we cleared security flawlessly with Zoe going through the metal detector after me, and boarded just as easily. In the back of my head I knew something was wrong. I have flown from Scandinavian airports enough to know that snow means de-icing and that the airports' de-icing equipment is not always ready to rock and roll; in Copenhagen for example, they drive the planes over to the de-icing area, which always delays everything. I was right. As Zoe closed her little orange extension belt, the pilot came on and told us that since one of the de-icing trucks had broken down, we would be waiting one hour on the runway. Make that two hours. Two hours where Zoe sat patiently reading the magazine, the safety instructions, ate a pack of nuts, fed her dolls rice cakes and sat on my lap playing with the window pane. I was very impressed, only in the end did she start complaining but then we finally took off and she fell asleep leaning against me. She woke up well-rested after we touched down in Copenhagen and walked out herself waving "bye bye" to the flight attendants.

I have a brilliant flybaby but I am still worried about her traveling after she turns 2. She will have to sit in her own seat on take off and landing and so far I have not been able to convince her to do this when we have a free seat. I explain to her that she is a big girl and that she has to sit there but as soon as she gets a bit bored she wants to sit on my lap. I am seriously considering lying about her age since Scandinavian airline has yet to ask me to prove her age (opposite in the US where each airline I have traveled with were very adamant about seeing either a passport or birth certificate to make sure she was indeed under 2). But then again, she will not get miles for her flight. And that is the next big thing: getting her her own frequent flyer card.
Posted by Louise at 4:43 PM No comments:

Mom on a Mission

The month of April for some reason has ended up being crazily filled with travel and deadlines, for both me and Mark. I had a funding proposal due yesterday which I hadn't really been able to start on until two weeks ago. Mark is away this week (don't ask where, I think Ireland and Brussels, not necessarily in that order), which means that I have exactly 7 1/2 hours to work every day due to both drop off and pick up of Zoe. As I have described before, our mornings can be rather long and chaotic and it is not easy to get myself ready when she is roaming around. With such limitation to my working hours (normally around a deadline I work more like 12 hours per day) I had to be extremely efficient, not just having lunch at my desk but explicitly turning off my email, phone and Facebook while working during the day, just hoping something important didn't happen (it didn't). But I surprised myself; with the determination that is normally reserved for the subway commute, I managed to work effectively and although I still needed to actually write several appendix documents yesterday morning, I had a funding proposal at 4pm. I submitted it and Zoe was not even the last kid to be picked up.

Tomorrow we are going down to Copenhagen for a bit of R&R, seeing mainly my parents and brothers. This is the last trip before I am leaving Zoe for a full week with my mom (and two days with my best friend who stepped in the days my mom couldn't). We are flying Norwegian, the discount airline that won't let Zoe sit next to me on the empty seat. The big question this time is if I should finally let her walk to the train station instead of bringing the Beco carrier? She is big enough to walk that far but I also like to have a way of securing her. In the airport there is also a quite long walk but they have luggage carts I can put her on for that trip. In will report back how it goes.
Posted by Louise at 5:19 AM No comments:

Mark had workshop to attend in Helsinki this past week and I decided to spend some air miles taking Zoe here to join him for a long weekend. We flew out on Thursday and are going back tonight, Sunday evening. We are staying at the GLO Hotel Art, a newly opened boutique hotel in a refurbished castle. It is a great hotel and it has amazing service such as their carefulness of looking afte Zoe's doll, which she had forgotten it at breakfast, greeting her with it as she entered the reception later in the day. And I love that their crib has cute mummin sheets and a real little baby duvet. All alongside the usual criteria for a good hotel: free wifi, nice toiletries and an amazing breakfast buffet. This morning Zoe got her first Kinder egg (probably because of easter), a well-known thing amongst Europeans, but a piece of candy is banned in the US. It is a chocolate egg with a little toy inside and watching Zoe open it with utter surprise was the best part of it all. 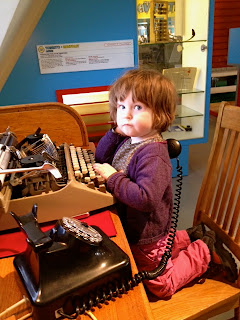 Helsinki is a rather rough looking city, I am surprised to see the pavements being in such bad shape (the wheels of the stroller got stuck several times) but the people are nice and friendly, although a bit quiet. On Friday, when it was just Zoe and me, we went to the national museum. It has a workshop area on the top floor where children can touch and play with everything. Zoe and I spent an hour and a half just roaming around, grinding coffee beans (to show the history of how coffee was roasted and ground at home), playing hide and seek around the wooden building structures (to show how houses were built in the old days) and playing with old office equipment (see picture). In the end I sat down in the replicate throne to relax and just let Zoe run around by herself. She had already befriended the staff so I knew she was safe. In fact I realized a major perk of her being bilingual, with English as one of the languages: When traveling she understands everything. People kept saying "well she probably doesn't understand what I say" and I happily corrected them and switched to English for the duration of the conversation.

The plane ride here was easy. We still need to work on the 'mommy goes first through the metal detector, then Zoe goes' and she was very upset when she wasn't allowed to get her shoes checked like her mom (Stockholm airport has a shoe tester for when people beep; they alternate body search with just a shoe search because 90 percent of the times the beeping item is the shoes). The only fail of the trip was that Zoe did not want to sit in the seat next to me, which happened to be free (and since we flew SAS they allowed me to choose if she sat there or on my lap). She started off there but as we taxied to the runway she got annoyed with her belt and kept unbuckling it, so I had to take her in the extension belt on my lap. I'm a bit worried about this because in one month she will have to sit in her own seat due to regulations. As I have written about before, I might lie about her age in the beginning.

Tonight when we fly back, Mark will be there to help and since he is gold (I, for some reason was 1000 miles short this year) we get to go to the lounge and I am quite excited about skipping the queue for checking in. Other than that it will be business as usual :-)
Posted by Louise at 3:24 AM No comments: