The Empire State Building is green and red, two colors Zoe would find boring, but she is not here to complain. Instead I'm hitting the two week mark of her absence where I start really feeling it in my heart. Her pictures around the apartment, her toys still scattered a bit between the bedroom and the shelf in the living room reminding me that she was just here and will be back again. In another two months. Not for long, because her dad informed me today that he wants her to be back in Europe for at least two weeks before she starts school so she can get over her jetlag. Not like something we could talk about or agree about. "I want her back in Stockholm by x date". I am not sure exactly when this whole parenting thing turned from two people trying to agree about what is best for Zoe, to demands and requirements. It is honestly the weirdest thing. And it only adds fuel to my hurting heart, missing her, missing hugging her, chatting to her, reading long chapter books before bedtime and rubbing her back as she falls asleep. She is and will always be my little baby. And being without her is like missing a piece of myself.

If it wasn't enough that I miss her, my life is as messy as it could ever be. Having my visa cancelled out of nowhere was nothing compared to this. On top of having a major life decision in front of me, I'm responsible for coordinating some conference work that will take about 30 hours to do this weekend and be a major chore this summer. And then I have all the work at my second job, which is actually my main job at the moment since they are the only ones providing me with a salary. On top of that I pay too much attention to someone who doesn't deserve it, someone who can't help pay attention to me either, but who should know better. I just want to move on. I just want to have made this decision, to be on the other side, next to Zoe, having pizza on a weeknight and discuss how the stars were made and why her friend in school doesn't speak another language.

I keep concluding that it's game over. That I have been defeated by circumstances and really bad life choices such as who I decided to have a child with. It makes me depressed and sad and incapable of working on anything serious for a while. But then I remember my promise to myself. That I'll never give up. That I *will* one day have that professor job in the US, no matter how much I have to sacrifice. Except I'll not sacrifice any time with Zoe. And this is where I fail again. And again. As her dad satisfactory said to me last time he picked her up: "I have my research group now, this is what I always wanted". I'm so happy for him.
Posted by Louise at 10:50 PM No comments:

Last night was the first time where I just didn't have the strength to explain my situation to yet a new person and simplified things, just telling the newly befriended acquaintance that my daughter went to that particular school in her neighborhood. It stung like crazy when she happily suggested that we might bump into each other in the morning because she always walked her dog down Bedford Street around the time of the school run. It stung because there is no more school run. There is no more chit-chatting to the other parents, getting approached for volunteer activities and then me running off to work, stopping by the bakery for a warm croissant on the way, running back in the afternoon to pick up and take Zoe to dance class. Exactly a week ago I said goodbye to Zoe in the lobby of a hotel, both of us crying and me hurrying out because I just couldn't do another hug. 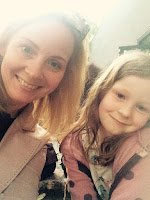 Most women, mothers or not, even sometimes men, tend to go quiet when I talk about my situation. They first have this "what a great life you have, a great job, a great situation", until it dawn upon them what I have had to give up. And that if I want the career, the success, which is right in front of me now, offering to make up for lost years, I have to give up spending my everyday life with my daughter, the person who means the most to me in this world. And no matter what, I'll spend countless hours (and money) on airplanes to see her for short moments.

"Mommy, I don't understand why it is, but I cry more when I'm with Daddy than when I'm with you. I just get upset a lot", Zoe told me as we walked to school the last day. She had just spent a long weekend with her dad, on holiday. I said I was sorry but didn't know what else to say. To me it is obvious. I don't really have a choice, I know what to do and maybe in another ten years I'll get another chance.

The first weekend without Zoe is always the hardest one. It didn't help that I hadn't planned much in terms of being social, only an adhoc drink with a visiting friend on Friday. After managing to buy a birthday present to Zoe and work out Saturday, by Sunday I was going into such mental disarray that I felt out of control. A final spur of energy made me turn on Eurythmics' "Sisters are doing it for themselves" and get out the door, walking to the Lower East Side in the pouring rain. And there I was, in my Tory Burch ballerina flats, having a double latte at El Rey (where they also happen to sit in Master of None, but by then I already had three stamps on my coffee card) feeling really stupid that I felt so sorry for myself. Yes, I didn't get all the things I wanted but I still got a lot. In fact, it was as if I have gotten exactly half of what I wanted in life.

I wanted a family but I have half, two of us to be exact, and that exactly half the time. I wanted to live in New York forever, but I got to live here for a year and a half. Not that that is half of forever, but perhaps if you round it down a bit? I wanted that nice professor job and I got a professor job in a country I hate. I got to kiss the guy on the top of the subway stairs. Okay, on some counts I definitely got less than half, but I got something. I put on a smile and thought about all the things I got instead of all the things I didn't get or will lose. Because that's what it looks like, I'll lose New York and get something entirely different. And sometimes, half is just fine.
Posted by Louise at 11:44 PM No comments: