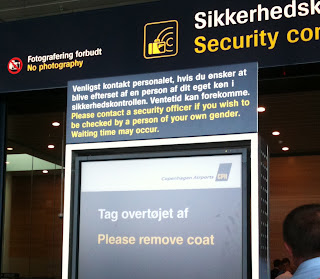 In Copenhagen when I flew out I noticed this sign and took a picture (shh, don't tell anyone because that was not allowed). I thought of all the times going through US airport security where there are always one officer of each gender waiting for you in case you need to be searched. It has never entered my mind that this would not be the case. But apparently in Denmark people are more free-spirited, which ironically I proved this time around: I beeped going through with Zoe in the Beco carrier and there he was, a tall, smiling young guy, ready to frisk me. I stepped up on the little step and it was over in less than 5 seconds. I didn't say anything and didn't flinch, but afterwards kept wondering how I would have felt if I had been from a different culture. Traveling so much as I do definitely gives you thick skin when it comes to frisking and strangers going through your most personal belongings (dirty underwear, migraine pills, breast milk etc.) but I am also very aware of how others might feel differently. Traveling by plane is still a choice for most people, in most situations, either as part of their job or part of a chosen leisure activity, which is probably why the airport securities around the world can get away with humiliating people and overstepping their personal boundaries on a daily basis. Yet culture seep through in these different levels of embarrassment of people, Copenhagen being one of the more drastic airports that I have seen (one exception being London Heathrow where I was asked to taste my own breast milk).
Posted by Louise at 3:44 PM No comments: