I have been ignoring it for two months but now it is getting real. In two days, Zoe will be picked up by her dad, go on vacation with him, the girlfriend and some of his friends. Then we are all going to a conference before they fly back with Zoe for her to spend the rest of the school year in Stockholm. I will not be able to see her for two months, since I can't go back before the end of June when my holiday starts. Well, in theory I could go back, but then I would not be able to return (visa issues) and I would not be able to work and have a salary for the summer. Not unlike last year where I had my first two months ever without Zoe. They were some of the hardest days I have ever had, but we survived. 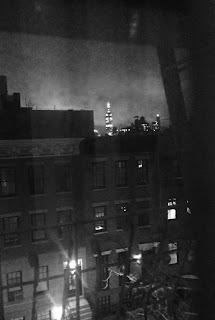 This evening, as Zoe was happily playing with some of all her birthday presents from Saturday, I started thinking of the reoccurring theme: How will this lifestyle of living in two different countries, of having to switch context often, of having two sets of friends, yet being far away from extended family, how will this affect Zoe? How will she deal with it later on when her opinion will matter more? Will she be able to understand why we live in two different countries? Will she like one country above another? I occasionally mention things about moving, both because my future is uncertain, but also just because I'm subletting and can't stay here forever. Today I said something about next time I find an apartment and she flinched, looking up at me. "No mommy, no mommy, I want you to be here." She wants to stay exactly here in our tiny apartment, going to her wonderful local public school with her wonderful friends, taking acting and dance classes a few blocks from here. I realized that she likes stability, because in her life she has seen very little of that. Today on our way home from acting class, we counted just how many apartments she has lived in. Eight different apartments, four different cities, three different countries. And she is turning six.

Later we sat in the bed with pajamas and duvets, watching Muppet Show, the one with Debbie Harry, Zoe's favorite. We both sang along to all the songs and laughed at the grumpy men while outside the window, the Empire State Building shone its signature color. I wrapped my arm around her and hugged her extra tight, knowing it was the second last night in a while. But right now, I was able to just enjoy the moment, just the way things are and life just didn't get much better than that.
Posted by Louise at 10:52 PM No comments:

So despite my life being as messy as always (heart broken, uncertain work/living future) I managed to have the most amazing New York Living week, partly because Zoe's babysitter was away. After our usual yoga Monday I was the super mom and went with Zoe's kindergarten class to the Zoo on Tuesday. It was wonderful to get to know her classmates better and to be that mom who has the time and energy for this. I had to stay up past midnight to finish work but it was worth it all. Wednesday evening I went to the ballet with a good friend and because we are both working moms, none of us had had dinner so we had to go for burgers and wine afterwards, making me tipsy and hungover the next day. Thursday, Zoe had a play date with her good friends whose dad took them to the playground, fed them sushi and let me pick her up at 7:30pm meaning I got a lot of work done and was able to go to bed early. To top the week off, Friday night I went to a benefit dinner party for Zoe's school, with open bar and 10$ babysitting. I danced with the other moms and traded gossip, before picking up a sleepy Zoe. All in all, a week of New York Living at its best.
Posted by Louise at 9:38 PM No comments:

Zoe woke me up by gently squeezing my arm, telling me it was weekend. We made bagels with nutella and I used my last bit of milk for a strong latte. She started making birthday cards to her grandmother and my brother who both have birthdays coming up, very creative with hearts, stars and glitter glue. I started my 3rd job's tasks, things that I mostly have to do on weekends, often when Zoe is asleep. This 3rd job means I'm surviving in New York as a single mom.

But time is running out. By mid-May my visa is expiring, which means my jobs are running out, which means I have no income. I have a few options, one is applying for another visa, but it is insanely expensive (6000+ $) and I would need to have a job offer. Which I'm not sure I will have. I'm waiting for three people to get back to me about options right now, something that I hate, putting my fate in others' hands. I feel I have ended up in some bad situations in my life by waiting for others or let others influence my decisions. I followed my ex-husband three times for work, which means I have missed out on so many opportunities that other people like me have in my field and ended up in a horrible work/living situation. Trying to correct that now has been extremely difficult. But I'm not giving up (not entirely sure what giving up would look like anyway), I'm still looking for that permanent position in a country I like living in (i.e. the US), that pays enough for me to support a middle class lifestyle for Zoe and me. One pair of designer shoes per year for me and weekly dance classes for Zoe. It's all I'm asking.

Oh and it would be nice to have a boyfriend too. So far, since my divorce, I have managed to date a flaky liar, fall in love with a guy who works for my ex and then my boss. I get dates with guys who buy their degrees on the internet and end up sleeping with my friends, usually putting an end to that friendship. Once a month I vow never to deal with any guys again and live happily ever after, just myself. But then I see them all around me, being all nice and sexy and cute and sometimes even amazing dads. And I fall head over heals again, over the most inappropriate guys who have no interest in me whatsoever.

Zoe finished her birthday cards and we packed them into envelopes. I finished my reviewing of papers and we went to have sushi in the afternoon. At least we have each other and that's not too bad.

Posted by Louise at 5:39 PM No comments: