Occasionally my research involves interviewing people and transcribing those interviews. For a particular project, I conducted five interviews last month when Zoe was here. She happened to be around for four of them, partly because one had to be on a Saturday, partly because her school was closed one day and I had to take her to work. Today I had to listen through them and write notes which was with a nostalgic and sometimes heavy hearted feeling. She came and disturbed be through all of them, though nothing major, just little "Mom, I can't find the scissors, can you help me" (she proceeded to make a paper princess crown, painting it all by herself during one interview), or "Mom, my video is scary, can you help me find another". I missed her even more listening to her voice and wished I could hug her during that scary part (I remember doing, but you can't hear that on the recording) and help her with the crown. 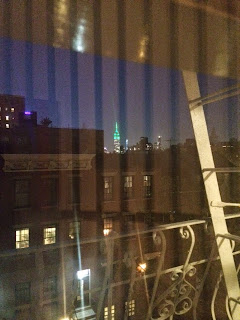 It got me thinking how she has always been part of my work life. How I somehow have managed to work quite a bit when she is around. Not the work that requires sharp thinking but the lighter parts, such as interviewing (I once had her with me in a stroller and managed to schedule it during her nap time), reading academic materials and preparation of teaching. I just never felt I had a choice, I am not willing to give up spending a lot of time with her. She is still little and I want to enjoy the time we have together because it is short.

As I went through old voice recordings on my iPhone later this evening I found a very old interview of Zoe herself from when she was 2 1/2 years old. I don't remember any details but I ask her what her name is, where she is going and she is hesitantly answering. Her voice is the cutest, sweetest and I can't believe this was just two and a half years ago. It was a different world. I recorded a little message for herself and snapped a picture of the Empire State Building, sending it to her dad. I have promised her a picture for every night when the building is a different color and that is what she will get. Hopefully, the days will go fast until she comes back to me to stay again.
Posted by Louise at 11:12 PM