This morning, at 6am, I left Zoe with a virtual stranger in a strange house because I had to catch a flight down to Copenhagen to make one of my many job introductory meetings. She hugged me and told me she loves me and then went tiredly into the extra bed for another hour of rest, until the other children in the house would wake up and play and have breakfast with her. All before the stranger would take her and the other children to school at the normal school hour. After the door closed behind me I rushed teary eyed down the dark staircase to catch the express train to the airport. There I had breakfast in the lounge and boarded as one of the last passengers at gate 9, on SK410 to Copenhagen, making my meeting with a couple of minutes to spare.

Exactly two weeks in, we are still getting used to our new lifestyle, Zoe and I, and although I knew there would be hiccups in my meticulously planned schedule, this week was worse than I had imagined, colliding with my most important yearly article deadline today. Because I am still starting my new job, there are a lot of meetings that I need to show my face at, not necessarily to receive essential information, but to show that I'm a team player and that I'm part of this new department. It doesn't help that my head of department has promptly informed me that unless I get this "Zoe situation" solved before Christmas I have to go on part-time. That's right. Unless I stop spending one day a week working from Stockholm, I have to switch to part-time. Where all other academics at all other universities have the opportunity (and often the right) to work from home (or the beach) 1-2 days per week, as long as their duties are being done, I somehow don't. "We have defined working hours here, they are in your contract", she argued and I realized that I had indeed signed such contract but because it is so normal for academics to work flexible hours (most of us work way more than 40 hours, both nights and on weekends, particularly in relation to teaching preparation and deadlines),  I never thought I would be held to it.

So when Zoe's dad texted me Sunday evening that Zoe was sick and could I please pick her up at 1pm Monday instead of from school, I panicked* because I had meetings all day and had arranged to have a babysitter pick her up so I could just fly in around 8pm. When I asked the babysitter if she could pick up Zoe earlier she said she didn't want to get sick and then actually couldn't pick up Zoe at all. I did the only obvious thing, I called in sick to my meetings, got on the first plane possible Monday morning, picked Zoe up and we went home and had movie night with popcorn and hot tea with honey. By the next morning she was actually well enough to go to school on the Tuesday, but I picked her up early.

So why did I drop her off at a stranger's place this morning? Well, sometimes people just pop up in your life, who has empathy and understanding, and know that you would do the exact same thing for them. Since the babysitter was now out of the picture (I had asked her to come over to our place at 6am to take Zoe to school, long time ago, so I could catch my plane), I voiced my panic to another set of single moms in my social network. One of them invited Zoe and me over for dinner Tuesday night; Zoe and her two girls got along brilliantly (they all speak English) and she offered to take Zoe to school Wednesday. So of course she is not a stranger, it turned out that we had our basic degree in common, had both lived in Britain, and we bonded immediately over our lives combining careers and motherhood. Zoe was completely at ease being left there and as the pictures that kept tricking in on my phone showed, they had a great morning playing their hearts out with legos. Oh, and of course I got myself a new babysitter who is not afraid of looking after a child with a cold.

*The first thing I did was obviously to ask how sick she was and if I could talk to her, wishing I was there to comfort her. It turned out it was just a light cold, but she was coughing enough to not be school-ready
Posted by Louise at 5:58 PM No comments:

A place to call home 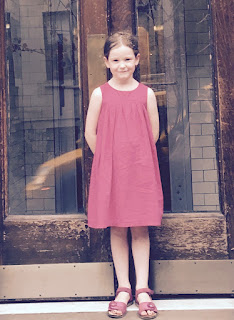 Four days ago I left the place that I now consider home. The place I feel most at ease in the whole world.

I left a number of close friends
I left a set of amazing colleagues
I left the place where Zoe flourished with schoolmates and dance classes
I left my apartment with a view of the Empire State Building
I left the place that I love
I left a guy who just the other night called me his girlfriend and then cooked me dinner
I left it all because of this one little girl.